At Yoast, we’re all really busy in the preparation for YoastCon next Wednesday, as you will understand. When us SEO people are really busy focussing on other stuff, Google tends to ‘surprise’ the online community with breaking news, algorithm updates or other developments that really need our attention as well. How is that, you might say. Well, remember the Panda updates that immediately affected 5% of the internet? That for instance also meant an increase in site review business for us. We want to be prepared :)

Google did another one of these algorithm updates on the 3rd of May this year, just a couple of weeks ago. Hubspot mentions mainly the less contributing How-to sites that lost rankings, like HubPages and eHow. By less contributing we mean in terms of contribution of new, quality content to Google. Google claims it wasn’t Panda. Nevertheless, it seems that mainly sites that already dealt with a Panda penalty dropped in rankings.

There are many names that are given to this update, as none was given by Google. Did anyone already mention that Google is less talkative about these updates since Matt left? That on a side note. The name for this update we like least is ‘Quality Update‘ or ‘Quality Algo’. That’s not a distinctive name whatsoever. For years, Google’s wish has been for webmasters to focus on quality. Panda is about quality, and so is Penguin. Google’s entire penalty system could be called Quality Algo. Glenn Gabe called it the ‘Phantom 2‘ update, it being the second large, unnamed algorithm change. I like that one a lot better, but have to say that, as it is clearly Panda related, Reverse Panda is my personal favorite. 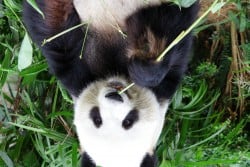 The update is told to positively influence rankings of websites that provide quality content, instead of Panda punishing sites that lack quality content. That would indeed make it a reverse Panda. Call a spade a spade, right?
The algorithm update isn’t targeting low quality sites, but a side effect of an update like that is of course a decline in rankings for these Panda candidates. Just stop being bamboo, as we often say in the office. It’s all about quality content. Google’s search result pages are stuffed with websites and if your website simply isn’t contributing on a larger scale (e.g. in the search results), you’d better up your game fast.

You’ll probably not find notifications on this reverse Panda update in the Manual Spam Action section in Google Webmaster Tools, by the way. For two obvious reasons:

What was that all about, right? Since not all users of Webmaster Tools are webmasters, they renamed it into Google Search Console. To target ‘more users’. Seriously. But hey, it brings in some extra traffic, right. That is why we decided to rename our Yoast SEO Premium plugin into Page Analysis And General SEO That Includes Redirect Options For Crawl Errors In Google Search Console Plugin. That just makes clear that it’s not just for people that want green bullets. Now excuse me, I’ll have to go and rewrite all pages on this website about that plugin.

Michiel was one of our very first employees and used to be a partner at Yoast. Kick start your site optimization with his articles!