Users expect websites to be fast. As the world becomes increasingly mobile, and as consumers expect services to be on-demand and seamlessly delivered, having a poor site speed can seriously impact your SEO.

Google understands that the time it takes for a page to load is a key part of the overall user experience. Waiting for content to appear, being unable to interact with a page, and even noticing delays creates friction.

That friction costs not only time, but also money. Research from as far back as 2016 showed that 53% of mobile website visitors will leave if a webpage doesn’t load within three seconds. And those kinds of bad experiences can leave a lasting negative impression of a brand.

In fact, research shows that the level of stress from waiting for slow mobile results can be more stressful than watching a horror movie. 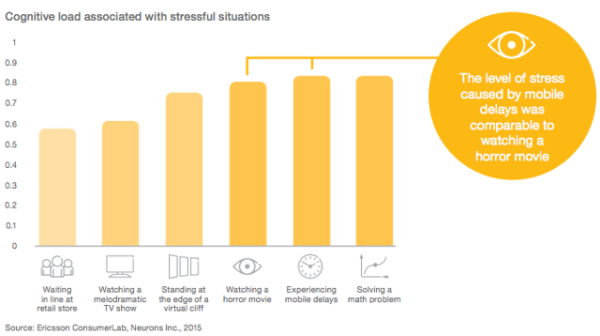 And it’s not just Google – research from every corner of the web, on all aspects of consumer behavior, shows that speed has a huge impact on outcomes.

These costs and this type of site abandonment happen because users don’t like to be frustrated. Poor experiences mean that they go elsewhere, visit other websites, and convert with competitors.

Those behaviors are easily tracked by Google (through bounces back to search engine results pages, short visits, and other signals), and are a strong signal that the page shouldn’t be ranking where it was.

Speed isn’t only good for users – it’s good for Google, too. Slow websites are often slow because they’re inefficient. They may load too many large files, haven’t optimized their media, or don’t make use of modern technologies to serve their pages.

That means that Google has to consume more bandwidth, allocate more resources, and spend more money.

Across the whole web, every millisecond they can save, and every byte they don’t have to process, adds up quickly. And quite often, simple changes to configuration, processes or code can make websites much faster, with no drawbacks.

That may be one reason why Google is so heavily invested in the AMP Project, and why they’re so vocal in their education on performance.

A faster web is better for users, and reduces Google’s operating costs significantly. Either way, that means that they’re going to continue rewarding fast(er) sites.

Unsurprisingly, some of the best resources on optimizing your website are from Google themselves.

We recommend that you explore their Web Fundamentals documentation to get an understanding of the techniques, tools, and approaches to building faster websites.

There are also a variety of tools available for measuring and monitoring the speed of your site. Here are a few which we recommend trying out:

Any questions? Let us know in the comments!