Yoast's famous SEO conference is back! Featuring some of the world's best SEO experts.

11 May, Nijmegen, The Netherlands

Over the weekend we saw an incredibly big shuffle in Google search results. I wrote about it earlier this week, as we were researching what happened. I’ll be honest: we’re still researching. But let me update you on what we know and don’t know about this Google core algorithm update.

We know a few things about this update now. Despite all the promises about a Google Penguin update early this year, this is not it. It’s also not Google Panda. But there’s news about Google Panda anyway, which I’ve written a separate post on:

How we know that this is not Penguin or Panda? Googler Gary Ilyes said so. New Google star Zineb Ait tweeted that this update didn’t have a name but was “just one of the frequent quality updates” (in French).

What did this Google core algorithm update change?

So… What changed? We don’t know. The changes are… Weird. We’ve been using a couple of datasets to look at this update, but most of all we’re looking at SearchMetrics. They publish a list of winners and losers every week and this week the changes seem to have happened mostly for news sites, specifically for brand terms. For instance, check this list of the keywords that the biggest loser in the US, the Atlantic, lost its position for: 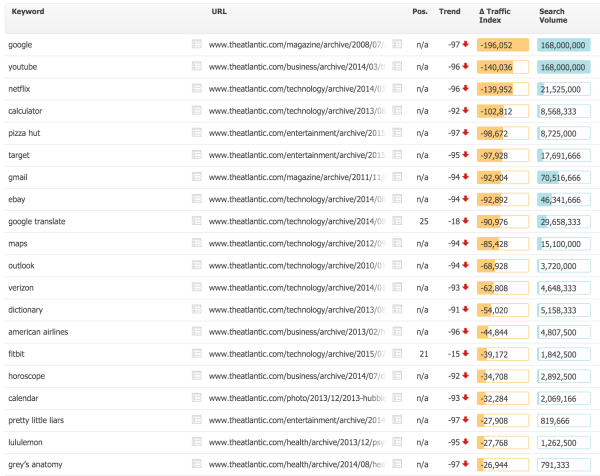 Bartosz has written a good post (with tons of interesting screenshots if you don’t have access to SearchMetrics), that touches on some of the things I had seen too. He calls it a “brand bidding update”, which I don’t think is right. I do agree with him that the change was in the type of results that Google shows for brand queries. The switch seems to have been from news articles to more “timeless” URLs.

You won’t believe this, and it’s a correlation only (so don’t say I’ve said this is true), but I’m seeing a high correlation between the keyword(s) being the first word(s) of the slug (the URL) and the ranking. It can’t be that simple though. It’s very possible it has to do with a better site structure for the winners versus the losers. Some of the biggest winners are category URLs on sites that have good optimization for their categories and good internal linking, like Mashable. So… This might be a good time to revisit your Category SEO tactics:

SearchMetrics (and many similar tools) calculate a score based on the amount of traffic for a specific term and the position you’re ranking on. The idea is that if you rank, for instance, #3 for a term, you’ll receive a certain proportion of the traffic for that term. This is a very valuable way of looking at a site as a site’s visibility score usually has a high correlation to a site’s traffic.

This means that the actual changes in terms of traffic for this update, even though the changes in visibility are huge, will differ highly per term and will, very often, be negligible. This is in my opinion something in the SearchMetrics visibility score that has to be changed, and something I’ve discussed with my good friend (and SearchMetrics founder and CTO) Marcus Tober before.

The impact of this Google core algorithm update in terms of search results and visibility was huge, the impact on actual traffic might not be as big. There are definitely things we’ll need to figure out over the coming weeks / months though, like what the importance of site structure and URLs are. Interesting times!

Joost de Valk is an internet entrepreneur and the founder of Yoast. After selling Yoast he had stopped being active full time and acting as an advisor to the company, but came back to be its interim CTO. He is also the Head of WordPress Strategy for Yoast's parent company Newfold Digital. Joost, together with his wife Marieke, actively invests in and advises several startups through their company Emilia Capital.

11 May, Nijmegen, The Netherlands
Yoast’s famous SEO conference is back!

Learn from some of the world’s best SEO experts how to grow your business, optimize your website and outrank your competitors.