Q. Why is open source important to you?

“Open source is important to me because it’s what allowed me to learn how to code. I learned to write code by looking at other people’s code.

Another reason why open source is so very important to me is that I have a deep feeling that this is how software should be developed and how knowledge should be shared. This might sound a bit grand, but as humankind, it just doesn’t make sense to develop the same things over and over again. In open source, the community has a shared responsibility to find solutions to problems together. Take WordPress for example, collectively we are fixing the problem of publishing to the web. Other projects tackle different problems in the same way, together. This is how society should function; when we set our minds to it, we can achieve anything if we combine our efforts.”

Q. In what way do you contribute to open source projects?

“I actively contribute to WordPress Core myself. In addition, as a company, we contribute to open source platforms by donating development time, design time, marketing time, and money.

People seem to think it’s rather easy to develop something for WordPress and that it doesn’t cost anything. That’s not true of course. It takes a lot of time and effort to develop a tool like Yoast SEO. Think about it, the readability analysis in Yoast SEO took about six man-years to develop. We could have put it in the Premium version, but we thought about the impact it would have if we gave it away for free. So we did. Come to think of it, I’ve never thought about taking something out of the free version of Yoast SEO to make people pay for it.”

Q. Who is your open source hero?

“Jimmy Wales of Wikipedia. He’s a hero because he open sourced Wikimedia, the platform on which Wikipedia is build. In a way – with Wikipedia itself – he actually open sourced all knowledge. That’s just really awesome.” 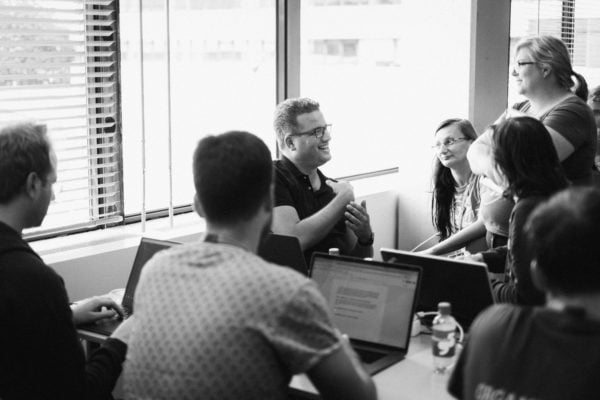 Q. Do you have to be a developer to be involved with open source?

“No, absolutely not. Every open source project needs copywriters, translators, marketers, designers and project managers in order to succeed. Also, we need people with lots of other skill sets for, for instance, organizing a conference. Just look at all those WordCamps around the world; all of them are organized by people from all walks of life. I think that at Yoast, about half of our contribution is not code.”

Q. When and what was your first open source contribution?

“My first open source contribution was a test case for WebKit, the core of Safari and Chrome. This was at the end of 2005. I’ve written hundreds of test cases for WebKit and I started blogging about that on WordPress. That showed me how a group of like-minded people could go up against mainstream, rich companies. WebKit’s small team made waves with the product. Different browsers adopted it and it helped them to hold their own against the incredible power of Internet Explorer. We were unbelievably efficient. I discovered very early on that it was better to build something together than on your own.”

Q. Does open source say anything about the quality of a product?

“Open source itself is not a guarantee of quality. There’s good and there’s bad open source software. However, with open source software, you’ll always be able to hire a developer to work on a product, even if a product is abandoned. You’ll never end up with a completely dead product because you can always reach the code. I think that is a major advantage of open source software as compared to closed source software. Just take those design agencies that develop bespoke CMS’s. Why? It’s nonsense. It leads to vendor lock-in and that is horrible. There’s only one model: the open source model.

It’s also about money versus community. A lot of money versus no money. As a community-driven CMS, WordPress continuously has to figure out how to go up against large-scale commercial efforts. But, in spite of all that money, WordPress continues to grow like wildfire. We’ve reached critical mass and it will only go up from here.”

Q: What are some of the downsides of open source?

“The political games are no fun. It’s a community and therefore pretty diffuse. It takes time to reach a consensus. It’s hard to navigate the waters when there’s no one actually in charge. You have to figure out where decisions are being made and try to be there to influence them. That’s when you find out that not having anyone in charge can make it harder.”

Q. How do you learn from open source software?

“Open source code is visible to everybody. Because of that, you can learn from other people’s code. You can see and learn from the solutions of other people. Working on open source projects also means that you can discuss and collaborate with others who are working on the same product.

At Yoast, for example, the developers learn from each other, but they also learn from all the other developers in the WordPress ecosystem. Because of that, because they learn from so many, different developers, they quickly improve themselves. They become better developers. I really think that people severely underestimate how important this is.

For instance, why should a school build their own site when there are hundreds of schools with the same requirements and questions? Join hands to make it manageable and cheaper. Just think how much the government could save if they used open source everywhere.”

Any ideas on whom to interview next? Which open source fanatic should I reach out to? Let me know!

Keep reading: Why our mission is: SEO for everyone »

Marieke is the head of strategy at Yoast and founder of Yoast SEO academy. She loves coming up with new ideas and products to make SEO attainable for everyone, and ensure a healthy growth for Yoast!

7 Responses to A big shout-out to open source