Today we’re releasing what’s probably the single biggest update to our WordPress SEO plugin since its initial release. It improves speed, fixes a ton of bugs and edge cases and adds a new bulk title & description editor. On top of that we’ve changed several default settings and added some smaller new features. This post addresses all of it, so keep on reading.

Every post in WordPress has metadata, and our WordPress SEO plugin adds more metadata to that: from indexation settings, to meta descriptions and titles. We used to store those in a manner that was not as efficient as we wanted it to be, so Juliette, who became a committer in WordPress SEO a few months ago, rewrote the entire logic. This fixes a ton of the bugs we’d encountered over the years but also, and more importantly, makes us use the database a whole lot less.

Along with these rewrites to how we save the plugins options and post metadata, we implemented a new class loader. This class loader make code load only when it’s needed, leading to a far smaller memory footprint and a lot faster performance on both frontend and backend.

We also rewrote several of the queries used for the XML sitemap generation, leading to a 70% decrease in the number of queries used to generate the index sitemap, making that a lot faster too.

Pippin, from EasyDigitalDownloads, has been running the 1.5 beta on easydigitaldownloads.com for a while already, when he flipped, this is what the performance graph looked like:

That’s a 20 to 30% performance increase. Granted, Pippin had been suffering from a particular bug in WordPress SEO that most of you probably won’t have been hit by, but this shows a tremendous improvement was made.

With this release, we’ve merged the SEO Extended plugin into core, with the help of its creator, Faison Zutavern of the Orion Group. It looks pretty cool and allows you, as you’ve guessed, update titles or descriptions in bulk: 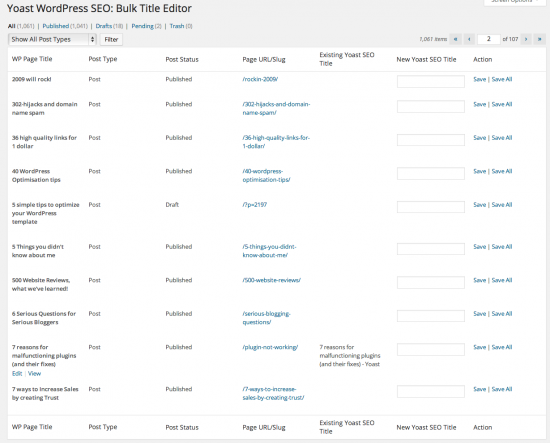 There are a few other things worth noting:

This release was very much a community effort. We’ve been reaping the rewards of switching to GitHub for the development of WordPress SEO and I think you’ll agree it’s good for all of us. If you’re a developer and have an interest in developing on one of the most popular plugins for the platform, join us on GitHub!

Update to all our SEO plugins

Because this update changes so much about how WordPress SEO works, all the plugins we released that depend on it have been updated too. This means you’ll see updates for Video SEO, Local SEO and WooCommerce SEO too, upgrade both at the same time, or after each other, but know that if you update for instance Local SEO without updating WordPress SEO, you’ll get an update nag. They need each other.

But wait! I run your Premium SEO plugin!

Don’t worry! If you run our WordPress SEO Premium plugin, there’s an update including all of the above changes ready for you in your WordPress install as well. Of course, if you’re a premium plugin customer and you run into any problems with the upgrade, feel free to email our support team.

That’s it, over to you, go update and see how you like it!