Comments are awesome, but the WordPress comments system is sometimes slightly lacking. Several large sites have, in the first few months of this year, announced they were no longer allowing comments. We, at Yoast, don’t understand that. We’ve found that there’s huge value in discussing our posts with our community. Over the years, we’ve made several plugins that all make the comments system slightly better. Today we’re announcing a new plugin that bundles some of that functionality into one simple to install plugin: Yoast Comment Hacks.

This plugin has 5 modules, all of which were previously separate plugins, some feature highlights:

By default, a comment of even 1 character is long enough to be saved. We think that’s weird. If someone wants to leave a comment, we’d prefer it if they have something real to say. This module allows you to set a minimum length and prevent people from leaving a comment if they’re under that.

One of our “old time classics”, this module allows you to redirect first time commenters to a thank you page. You can use this page to inform them about other nice things on your site, stuff they should really read, etc. Want to see how that works? Well. Leave a comment on this post and you’ll see!

This was actually not a plugin of ours. The original plugin which inspired us for this was built and released by Mike Davidson in 2008. Mike is now the head of design at Twitter and obviously has better things to do, so we emailed him a while back asking if it was ok for us to update his old plugin. He gave his OK so we went to work on his old code and brought it into this decennium. The code does one “simple” thing: make comment emails look better! See this example: 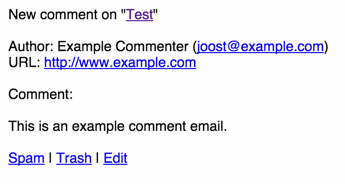 Check out the Yoast comment hacks plugin page for the other 2 modules and more screenshot examples. You can also check the code on GitHub, or file an issue there if you find a bug or have a great new feature idea. The plugin is of course also available on WordPress.org.

We’ll probably add more small comment hacks to this plugin as we go along and find more small ways to make the WordPress comments system easier to use. Do tell us what you’d like to see in the comments below!

Read more: How to handle comments on your blog »