Recently, while working on the site for my father in law (in Dutch), I wanted to create an XML sitemap for the many publications on his site, that are downloadable PDF’s. I regularly add PDF’s to his site too, and since I’m a tad bit lazy I don’t want to keep updating the XML sitemap. So I wrote a small XML Sitemap PHP script, that looks for all the files in a directory of a certain type, grabs their last modified them, and throws them in an XML sitemap.

Then, when working on another site yesterday, a Base64 encoding and Base64 decoding experiment, I needed an XML sitemap yet again. So I improved up the XML Sitemap PHP Script a bit further and decided it should be released.

Why make an XML Sitemap for Static Files?

Let’s first address the “why” of this script: in lots of cases, you’ll have static files, either they’re PDF’s, or static PHP or HTML files that create a site. I want all of those in an XML sitemap for two reasons:

This script assumes that all those files are in one directory. I know that’s a bit “lazy”, but if your site spans a lot of directories you probably should be using a CMS.

Of course this script needs a bit of configuration before it’ll work well. It has the following constant & variables:

Styling the output of our XML Sitemap PHP Script

Of course, we’ll want our XML Sitemap to look good, as well as work well. For that we use an XSL stylesheet which is included in the download. It makes the XML sitemap look like this: 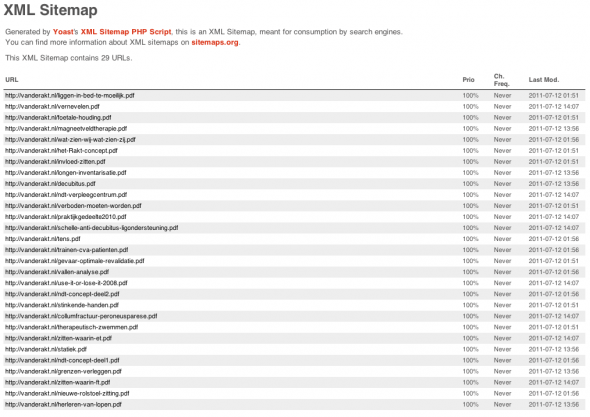 I’ve added the whole script on Github, so you can play, fork, etc. Or you could just download the zip.