It all started long, long ago in a town far, far away (from most of you) when Joost came up with a major improvement for our Yoast SEO plugin. “Imagine”, he said, “imagine that you’d no longer have to wait for your post to be finished and saved to analyze the content. Imagine that changes you’d make are reflected in realtime. Wouldn’t that make life a lot easier?”

When we all agreed it would, he decided this would be done. And this is what happened…

First, we needed more JavaScript knowledge, as that would be the language of choice for the real-time analysis. So we hired Danny and March 23 we opened up a new repository on GitHub; js-text-analysis.

For a few months, a lot of work on the new js-text-analysis project was done and it slowly started to turn into a beta version. And that’s when we first spoke about it in public. On June 2, Joost wrote about the stand-alone version of the js-text-analysis on yoast.com asking for feedback. And as you can see in the comments, we received a lot of positive responses.

This encouraged us to move even further. Having a stand-alone library for text analysis allowed us to use it on other platforms as well. That’s why we teamed up with GoalGorilla and started working on Yoast SEO for Drupal.

Meanwhile, we knew that switching from the old analysis to the new one meant change for everyone that integrated with our plugin. So on August 26 we announced API breaking changes in a newscast on yoast.com, giving developers a chance to adapt to the upcoming changes in time.

While working on the js-text-analysis we decided that name wasn’t as catchy as we’d like it to be, so we renamed it to YoastSEO.js and changed the GitHub project accordingly, so it can now be found at YoastSEO.js.

After months of work we decided to release Yoast SEO for Drupal 1.0-beta during DrupalCon in Barcelona. At a great launch party we showed the Drupal community what YoastSEO.js was capable of. For everyone who missed the party, we also wrote a blog post about it.

The Drupal community really adopted our module and we got a lot of very valuable feedback, an incentive to improve YoastSEO.js even further. This lead to a developer beta on October 8. Omar even wrote a thorough blog post about it on the new Yoast Dev Blog.

Now all we had to do was finalize YoastSEO.js and integrate it in Yoast SEO. And so we did. We even managed to make awesome changes to the layout of the Yoast SEO metabox, making it far more user-friendly and intuitive. We decided that this new layout allowed for a great new feature for Yoast SEO Premium, analyzing up to 5 focus keywords per post! 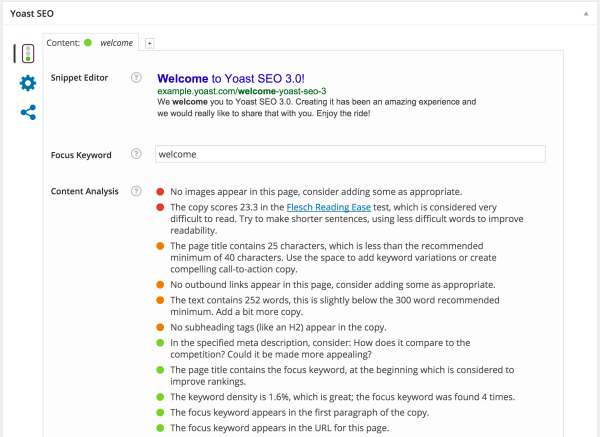 Just two weeks ago, Omar wrote another piece on the design decisions for YoastSEO.js. Internally this marked the start of a super-intensive testing period where 4 developers have been trying to break the new Yoast SEO in every possible way. And when our own pace of finding bugs and enhancements started to slow down, we released the Yoast SEO 3.0-RC on twitter and the support forums, and it even made the Post Status newsletter!

We’ve been testing Yoast SEO 3.0 until late last night before we decided, this is it. This is the version we’re comfortable releasing. We’ve tested more than ever before, we’ve announced changes months ahead, we’ve asked everyone to try the Release Candidate and got no negative responses.

The last months have been a rollercoaster, but we’re truly happy to present to you Yoast SEO 3.0!

Note:
If you do find bugs, we’re sorry. Report them on GitHub, and we’ll get them fixed.
Thanks, we appreciate it!

Taco Verdonschot is the community manager at Yoast. You can regularly find him at WordCamps and meetups. Taco is passionate about Open Source, WordPress, translating, hanging out with friends and making new ones, support, community building, helping others achieve personal growth, and many other things.