One of the most common misconceptions I often hear about Web accessibility is that accessibility is for people with disabilities or with some kind of impairment. Some people think it relates to a small percentage of users. Business owners and managers, even the ones who understand the value of accessibility, sometimes tend to think it can be set aside or postponed to a later stage of the development process, when a particular new feature, which is incompatible with a good level of accessibility, is worth it. Here, I’d like to share my thoughts on why accessibility is for everyone, including the future you.

Accessibility is for everyone

The power of the Web is in its universality. Access by everyone regardless of disability is an essential aspect.

I love this quote and understand the beauty and ethics behind it. But this was written a few years ago. Today, I’d like to remove the regardless of disability part. I’d like to live in a world where disabilities, impairments, and any other kind of diversity, don’t need any special terms to be classified and put on the right shelf. Everybody has special needs, just because we’re individuals. Inclusive design should try to take into account as much as possible everybody’s special needs because that benefits everyone.

I understand business owners and managers need numbers. There are a lot of statistics about disabilities and health in the world. The numbers may surprise you, but I don’t want to enter into that. Instead, I’d like to focus on something that’s going to happen in the next 10-15 years. It’s about who your customers and users will be in the very next future.

The world population is aging. Between 2015 and 2050, the proportion of the world’s population over 60 years will nearly double from 12% to 22%. By 2020 (just three years from now!), the number of people aged 60 and over will outnumber children younger than five years. The pace of population aging is much faster than in the past. (Source: World Health Organization). The population aged 60 and over is growing at a rate of about three per cent per year. (Source: United Nations: World Population Prospects 2017).

This trend is particularly true, and numbers are even bigger, in some specific areas. For example, Europe, North America, and Japan. As Adrian Roselli says in his talk “Selfish Accessibility” (Adrian is such a brilliant speaker that I’ve attended his talk two times during two different events), aging affects (nearly) everyone. Including your future you.

Statistics is not my area of expertise. I couldn’t find a good resource to relate the global aging data with data about the internet active users of the world’s population. If you know of any good resource, please do let me know. Let’s consider some data from the Eurostat 2005 community survey on ICT usage. The table below shows the Internet use by age of the European population in 2005. 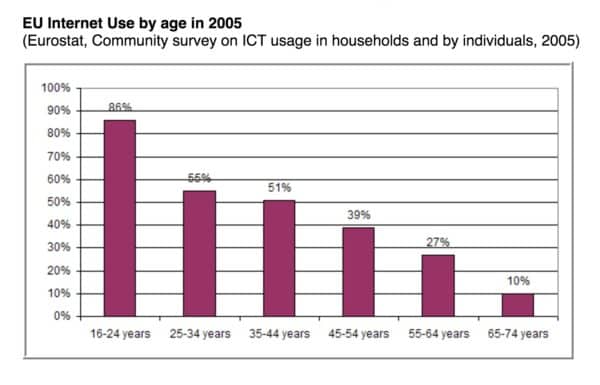 These data are already 12 years old at the time of writing. Not surprisingly, younger people between 16 and 24 years old were the most active ones: 86% of them used the Internet. People belonging to this first age group were in their twenties, and today they’re already in the second group, representing people between 25 and 34 years old.

Again, this trend is even more noticeable in some areas of the world. The Pew Research Center publishes every year a survey with data specific to the United States population. In 2008, 38% of adults Americans aged 65 and older were online. In 2014 this percentage increased to 59%. Today, 67% of seniors Americans use the internet. In the United Kingdom, in 2017, recent internet usage in the 65 to 74 age group has increased from 52% in 2011 to 78% in 2017, closing the gap on younger age groups (Source: Office for National Statistics).

With increasing age, people often experience changing abilities. Even if you are in good health and don’t suffer from any severe disease, some natural conditions related to aging will decrease your capacity to read comfortably, or hear, or use an electronic device. Unless we want to consider aging as a disability, this is something that matters to everyone.

Vision decline often starts in a person’s mid-40s. This includes a decreased ability to focus on near tasks, for example, a computer screen. Color perception and sensitivity changes: less violet light is registered, making it easier to see reds and yellows than blues and greens, often making dark blue and black indistinguishable.

Hearing decrease, from mild to severe, affects almost 50% of people aged 60 and older (Source: Web Accessibility for Older Users). Motor skill decline impacts on dexterity and can result from many conditions, for example, arthritis. It is estimated that worldwide, 9.6 percent of men and 18.0 percent of women over the age of 60 suffer from osteoarthritis, making mouse use difficult or impossible for some and also affecting keyboard use. Not to mention mental and cognitive abilities, memory, and attention skills, change throughout life.

I’d like to point out that some of the changing abilities mentioned here are not disabilities. They’re just natural human conditions. Also, there is no ‘typical’ older person. Some seniors have physical and mental capacities similar to many 20 year-olds. Other people experience significant declines in physical and mental capacities at much younger ages.

Aging and the tech industry

Traditionally, most workers in the technology industry have always been young, sometimes really young. A common assumption is that this prevalence of young workers is one of the reasons why it’s easy to see most technology is designed for young people. Until now.

Many of the developers and entrepreneurs I know in the web industry are now around 25 – 45 years old. In the next 10 – 15 years, these generations, including the one I belong to, will be the first ones representing people who grew in the internet era to shift to the “old people” group. We are the elderly people of the future. And we’re definitely active internet users. This will be the first time that a generation grown up with the internet will start experiencing changing abilities related to aging. Some of the most seasoned among us are already experiencing it. It’s time to start thinking differently. Time to start designing for all ages and changing abilities.

Start thinking of your future you.

At Yoast, accessibility matters a great deal. We know it’s a process and we’re continuously improving, testing, iterating, and developing. We’re always open to feedback and contributions. Please do not hesitate to let us hear your voice. Please report any issues or potential improvements you notice in our products.

At Yoast, I help improving Yoast's technology accessibility, spreading accessibility culture and blogging about it. I try to do my best to do the same for WordPress, where I'm contributing as a permanent core committer.

4 Responses to The a11y Monthly: Accessibility for the future you