This was quite the week in terms of search engine events. Yahoo! & Google doing a deal, Bing losing a key person, Google in yet another lawsuit, etc. etc. etc. And while all that seemed so important Thursday afternoon as I was writing this post, Facebook dropped the bomb of improving its search dramatically. Let’s dive in!

Yahoo! has a search deal with Google, again

Yahoo!, which got its results and ads purely from Bing for quite a while, now has a deal with Google too. It said:

In October, the Company reached an agreement with Google that provides Yahoo with additional flexibility to choose among suppliers of search results and ads.

Google could serve these results for Yahoo! in a specific set of countries / regions:

Notice anything in that list? Hell yeah. Europe is missing. Let me put on my tin foil hat for a wee bit and say that maybe, just maybe, Google and Yahoo! knew that doing this in Europe would raise some serious anti competitive alarms with the European Union. Where have we heard that story before? Anyway…. The most comprehensive coverage of this story is to be found on SearchEngineLand.

Yahoo! has its own mobile algorithm?

You’d think Yahoo! has enough choices now, as it can chose between Bing and Google to serve its results. But apparently, it has its own mobile algorithm and serves its own mobile search results. This explains, at least in part, why Yahoo! is still crawling the web. I’m curious to see where this goes… Could be big, as Yahoo! is one of the few companies on the planet right now with the cash and the knowledge to actually build a search engine that matters.

There are a few other companies that could do search and do it well though… One of them being Facebook.

Facebook just dropped a very splendid little bomb. It improved its search capabilities dramatically. This video speaks boatloads about their ideas for this.

I can’t stress enough how important this is. Google already has a problem with the amount of mobile searches people do, this will only decrease that number of searches. Because people don’t search less on mobile, they search elsewhere.

Facebook has a ton of data to search through. According to the Verge, Facebook has 2 trillion posts in its index. Personalized search (search adapted to your behavior, friends, etc.), which for Google has been something they’ve needed to grow into over the last few years, is something that comes very natural to Facebook. In fact, it would probably suffer if it had to make un-personalized search results.

This has a profound impact on how you share on Facebook: no longer can you just write something interesting. No, you should really make sure that your target keywords are shown in your Facebook description and in the title of your article as it’s shared on Facebook.

Bing is the little kid crying in the corner on all of this of course. They’ve also just lost one of their finest. My good friend Duane Forrester, their head of webmaster relations, is dropping the mic (his choice of image, obviously).

In this picture, taken at SEOktoberfest this year, Duane is the guy on the right, next to my wife Marieke: 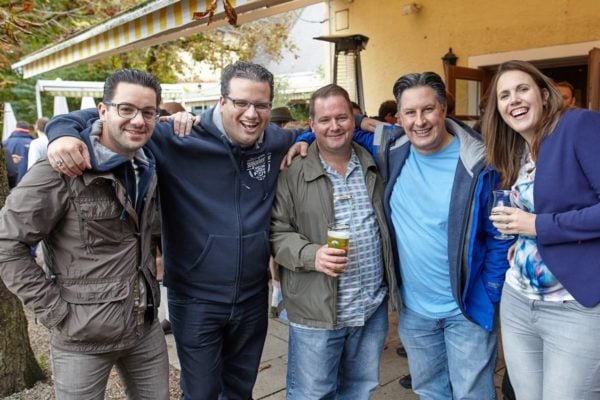 Duane was the last man standing in terms of search engines talking to webmasters. Google’s Matt Cutts has been on extended leave for what seems like forever now and Duane was one of the very few that had actually seen the inside of running a search engine and also had true SEO experience. I hope Microsoft replaces him with someone capable.

Luckily I know I will see Duane again at SEOktoberfest next year and I wish him all the best in his new endeavors!

The NY Times reports that Deutsche Telekom (the parent company to T-Mobile) is starting a new antitrust case against Google in the EU. This adds on to the already quite big stack of complaints against Google in Europe.

I’m waiting for the next court case now, the one in which Google and its sibling company Youtube are said to be abusing their market dominance to bring more paid subscribers to YouTube. Because that also happened this week; YouTube became a competitor to Netflix.

Finally, it looks like Google let loose a few more Pandas this week.