Willemien is the Manager Content of yoast.com. She loves creating user-friendly content and making it easy to find for people and search engines.

As of today, Marieke van de Rakt will be the new CEO of Yoast. Marieke, founder of Yoast Academy and former Chief Strategy Officer at Yoast, is thrilled to take on her new role and officially lead the company. Joost de Valk, former CEO and founder of Yoast, will start focusing mostly on software development, as the new Chief Product Officer of Yoast. Alongside that, he’ll be leading marketing and communications for WordPress, as his second job.

Marieke is the founder of Yoast Academy, the SEO training portal of Yoast. She joined the company in 2013 after obtaining her Ph.D. in Social Sciences and working at various universities. In 2015, she started developing Yoast’s first SEO training: Basic SEO. Soon other courses followed. Today, Yoast offers an impressive portfolio of SEO courses, tailored to the specific needs of people wanting to learn about SEO.

In 2014, Marieke joined the board. She took on the role of CSO and was heavily involved in the company’s strategy for growth, being responsible for content, marketing, research and project management. In fact, as Marieke wrote on her blog, she has already been acting as the CEO for a while now:

So will big changes take place? This is what Marieke says about it:

“I don’t think there will be big changes inside our organization. Things will pretty much keep running the way they were always running…. [However,] I am very curious to what extent people will treat me any different now that I am the CEO of Yoast. For a lot of people outside of Yoast, it was not very clear what my role at Yoast was. The job title of CEO will perhaps be a door opener for me.”

The mission of Yoast is SEO for everyone. That mission will not change as Marieke takes the lead.

‘We want to help people to create websites that rank in the search engines, with software and by teaching people about SEO. We have big plans for 2019, making SEO more actionable and understandable for everyone.’

One thing’s for sure: She’ll do “this CEO-thing” her way, as she says in her blog post.

Joost is the founder of the company Yoast and brain behind the very successful Yoast SEO plugin. Since he founded Yoast in 2010, he has been the CEO. Today, he’s stepping down and handing over this position to Marieke. He’s very confident she’ll do an outstanding job as CEO, as he says in his post:

“In many ways, Marieke is way more suited to be CEO than I am. She has so much more structure and isn’t as likely as I am to go “oh squirrel!” and forget about the important stuff. I’m sure she’ll continue to be excellent in her new role.”

Starting today, Joost will focus again on what he loves most: software development. As Chief Product Officer of Yoast, he’ll dedicate his time to further development of great tools which allow people to rank higher in the search engines.

“Having to worry less about stuff that needs my signature and other painful sides of being CEO will free me up to work on the core product more. I’m still super proud of Yoast SEO and look forward to working on it for years to come.”

In addition to that, Matt Mullenweg, founder of WordPress, appointed Joost as the Marketing and Communications lead at WordPress. An opportunity Joost took with both hands:

“I think WordPress is one of the most essential platforms on the web and I’m really proud to be able to do my part for it. I have been in the WordPress community for well over a decade now. In that time I’ve done a lot of different things but I think this will be my biggest challenge yet.” 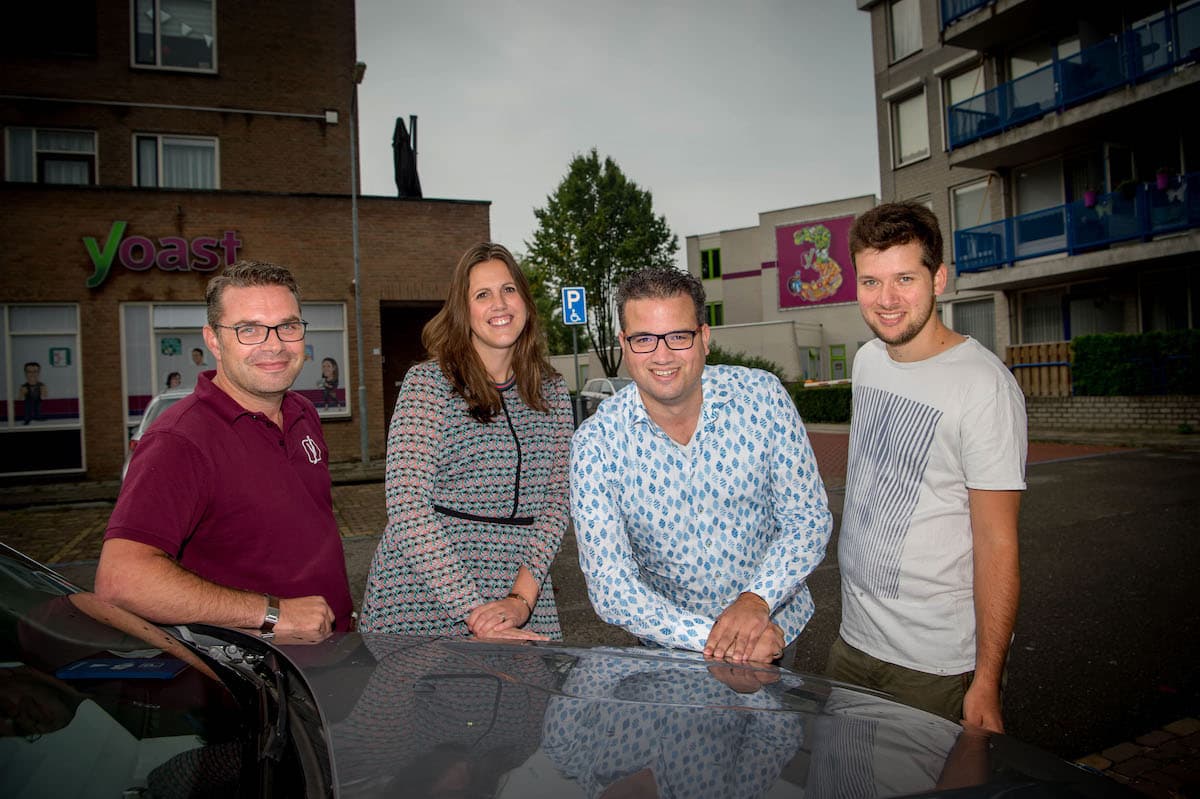 The Yoast board: Michiel, Marieke, Joost and Omar. Photo by Eveline van Elk.

The Yoast board exists of 4 people: as of today Marieke van de Rakt will take on the role of CEO and Joost de Valk will be CPO. Michiel Heijmans continues to be COO and Omar Reiss remains CTO.