This is how we synergize! 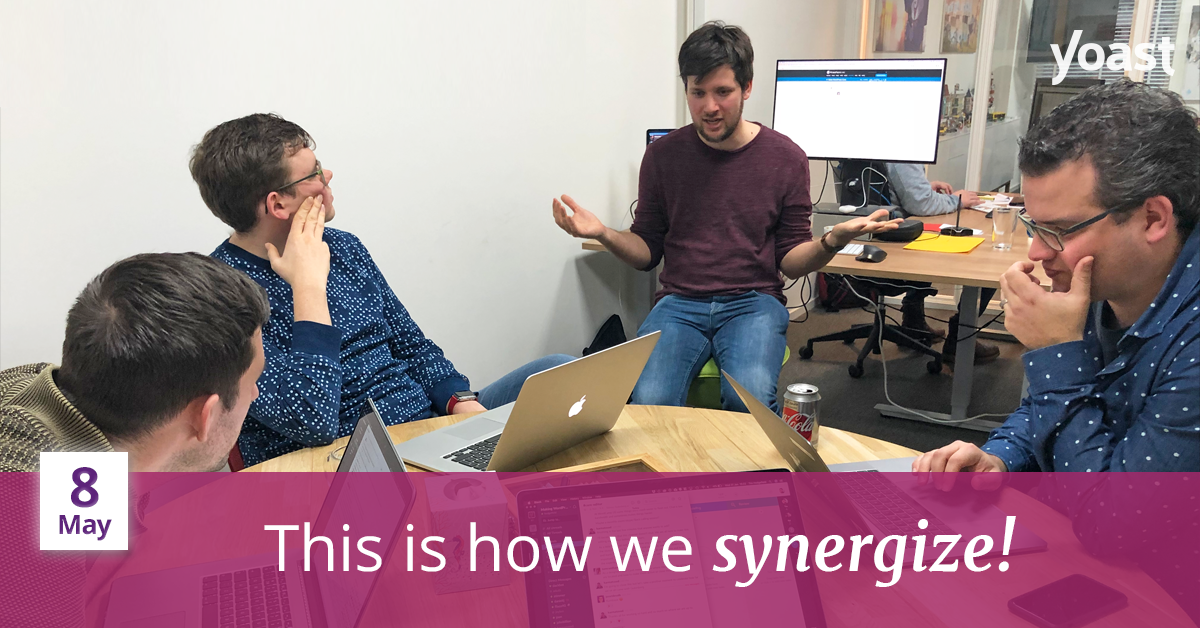 I f you make digital products, you’re only as good as your development team. And the development team at Yoast has made great strides over the years. Once we had some key players in place and made changes to the structure of the team and its work, the developers really took off. Omar Reiss, our former CTO, shares his team’s journey, explains what they do and how Yoast continues to make WordPress and the web a better place.

At the start of our journey, Yoast founder and CEO Joost de Valk developed not just Yoast SEO, but a whole slew of WordPress related plugins on his own. Joost made waves with his products, and when demand grew, so did support and feature requests. If Yoast wanted to produce a viable and scalable product in the future, he would need developers.

To cope with the demand, Joost brought in developers, but it wasn’t until Omar joined the team that it truly found solid ground. Omar, a philosophy major turned software developer, immediately saw that Yoast badly needed structure: “When I started, there was very little structure. We made up for our lack of processes and quality assurance with high-quality customer service. We relied on our agility and speed to fix bugs in a release. After a release, we would get together to look at bugs reported by customers and fix them right away. At that time, we had just formed the development team. Before that, Joost did almost everything himself.”

Omar quickly took the reins. After having worked at a well-known IT-company where he learned to code and was introduced to different process management tools and practices, he saw what had to happen: “After two weeks at Yoast, I gave a presentation on our way of working. I had just three slides: What happened and why is that bad? Why did it go wrong? And, how to fix it.

I felt compelled to help make the processes better, to organize them somehow. If you break tasks into smaller pieces, they become easier to manage. You know exactly what to do and minimize the risk of errors.”

From philosophy to Agile

Omar encountered coding and process management for the first time while studying philosophy at University: “During my studies, I had an IT job at a local college, but I couldn’t code at all. I first came into contact with Agile method­olo­gies, pair programming and other techniques to get the best possible result while working at a firm in Amsterdam where, due to my enthusiasm and positive mind­-set, I got a traineeship. I learned how to build software in Ruby on Rails and got into lots of other things, like building modern infrastructures and working together in holistic processes where everyone on the team learns to speak the same language.”

“I love to stimulate people and to get them out of their comfort zone. It’s all about creating a flow, working to learn and be as efficient as possible. That’s a process I deeply enjoy. At Yoast, I love to contribute to a culture of continuous improvement, where everyone works hard every day to be better individually and as a collective,” Omar says.

Yoast develops WordPress products and is therefore deeply embedded in WordPress. Apart from that, the company wants to make the CMS better for everyone – developers and users alike – and does that by contributing in various ways. One of Yoast’s main aims is to make WordPress core better. With all this talk about WordPress, you might assume these developers only think about WordPress.

Omar tells us that the developers at Yoast must have a specific mindset: “If you look at it from a web development perspective, we are working in an unusual development setting, thanks in part to the legacy WordPress system. WordPress is a vintage system that doesn’t sit that well with modern-day development systems. It is much more complex than today’s frameworks and therefore asks more of developers.”

“A lot of developers who work on WordPress specialize in WordPress only, but not us. We make sure our developers stay up-to-date with modern tools and practices and also stimulate them to apply those to WordPress development if possible. At Yoast, we ask a lot of our developers. It’s hard to convince developers that legacy systems matter and that it’s just not always possible to play with the latest and greatest. Most importantly, developers must know how to find their way within the limitations of WordPress. Adaptability is key,” says Omar.

As WordPress is a CMS based on legacy code, it is getting increasingly hard for modern developers to work on it. At Yoast, the development team tries to do everything in their power to enhance WordPress and to make it future-proof. Omar: “WordPress was built at a time where object-oriented programming didn’t exist. Luckily, WordPress does evolve. The release of the WordPress REST API added lots of new possibilities for developers to build functionality on top of WordPress.”

Omar continues: “We try to do more and more in Java­Script. This ties in nicely with our open source mind­-set; we don’t want to get too attached to one platform. WordPress is incredibly specific, and hardly anything is reusable. For instance, we wrote the content analysis in Yoast SEO in JavaScript so we can port it to other systems.”

There’s no need to doubt the future of WordPress, though, says Omar. “WordPress is an invaluable tool for a large community. It caters to a special group of users; people who can make something beautiful without breaking the bank. WordPress wants to democratize publishing and achieves that goal. That realization gives you an enormous sense of responsibility. Those are the people we work for. In that sense, WordPress’ priorities, like focusing on accessibility, for example, make sense.”