Having been away on holiday for 3 weeks, and not being able to write a recap last week yet, this is the first one in over a month. A lot has happened, but not all of it will directly impact your search environment, luckily, so let me cover 3 things that stood out for me:

Google changed its corporate structure. While this is interesting mostly if you’re too geeky about Google like me or you’re an investor, some changes do matter. Sundar Pichai officially became the CEO. He’s smart, but has a different management style. This is already becoming clear in articles like this one. About Google Now and whether it’s a priority or not. We’ll have to see what this leads to, but it already puts pressure on some parts of Google.

CTR as a ranking factor?

Is CTR (click-through-rate, specifically from the search results to your site) a ranking factor? A lot of SEOs, including me, thought so for a while, but thinking about it more, it’s also something that’s relatively easy to game. This piece of research was done pretty thoroughly and seems to indicate that no, it isn’t really a ranking factor. This piece says it is. I personally side with AJ Kohn, who puts it better than I could:

The evidence suggests that Google does use click-through rate as a ranking signal. Or, more specifically, Google uses click data as an implicit form of feedback to re-rank and improve search results.

A change that does affect you if Local SEO is something you think about: Google changed the way its local pack looks. Specifically, it changed it to a pack with 3 instead of 7 results: 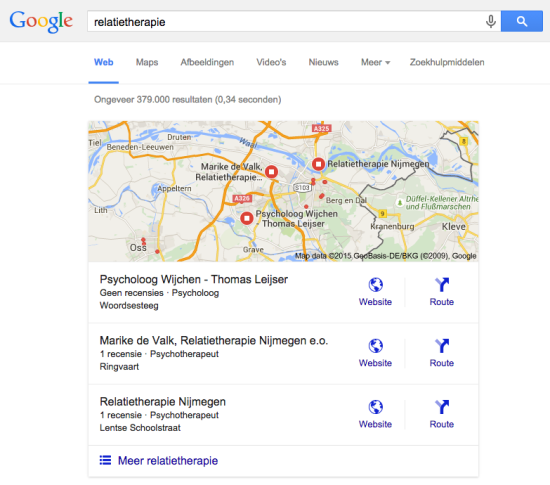 This new local pack has become way more prominent over the last few weeks. This means that for results that have this pack showing, it’s now in the #1 position 93% of the time where it used to only be #1 25% of the time.

If (a part of) your business is Local, now is the time to start investing more in Local SEO. We have both a WordPress plugin for Local SEO to assist you and some articles.

That’s it for this week, see you next week!

9 Responses to Alphabet, CTR and Local